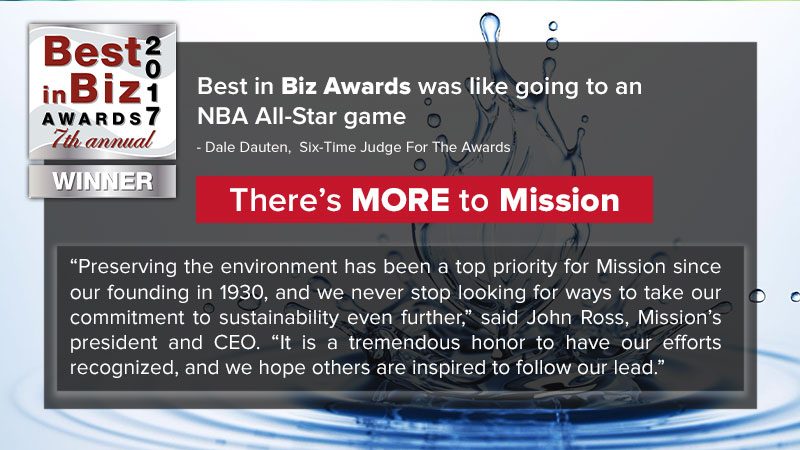 Mission Linen Supply, a leading provider of linens, uniforms, laundry services and select supplies, received a silver 2017 Best in Biz Award in the Most Environmentally Responsible Company of the Year category. Judged by an objective panel of prominent editors and reporters from some of North America’s most respected media outlets, this year’s Best in Biz Awards drew more than 650 entries across various categories.

Mission was recognized for its efforts to put environmental sustainability at the forefront of its daily operations and long-term business initiatives. As early as 1973, Mission installed one of the industry’s first wastewater recycling systems, and the company continues to help protect the environment by implementing water reclamation systems, energy-efficient equipment, paperless initiatives, alternative-fuel vehicles and numerous other “green” initiatives. Through these efforts, Mission saves approximately 1,030,000 kilowatt hours of energy and 141,000,000 gallons of water per year.

“Reviewing this year’s entries in Best in Biz Awards was like going to an NBA All-Star game — you end up shaking your head in admiration, smiling and saying, ‘Oh man, that’s gooood,’” said Dale Dauten of King Features Syndicate, a six-time judge for the awards. “And then the next one is even better. It’s a top-that competition.”

In addition to this Best in Biz Award, Mission recently received a Sustainability Leadership Award in the Business Intelligence Group’s 2017 Sustainability Awards program, which recognizes organizations that have made sustainability an integral part of their business practices or overall mission.

“Preserving the environment has been a top priority for Mission since our founding in 1930, and we never stop looking for ways to take our commitment to sustainability even further,” said John Ross, Mission’s president and CEO. “It is a tremendous honor to have our efforts recognized, and we hope others are inspired to follow our lead.”

About Best in Biz Awards

Since 2011, Best in Biz Awards, Inc. has made its mark as the only independent business awards program judged each year by a who’s who of prominent reporters and editors from top-tier publications from North America and around the world. Best in Biz Awards honors are conferred in two separate programs: North America and International, and in 65 categories, including company, team, executive, product, and PR and media. For more information, visit: http://www.bestinbizawards.com.